London – The “Plan B” for Brexit unveiled by British Prime Minister Theresa May is facing fierce opposition, indicating the proposal to likely go down to defeat, in the parliamentary vote to be held next week. Both the ruling and the opposition parties have suggested several changes to the plan outlined by Prime Minister May, and an amendment towards it has been put forward in the Parliament. Against the background of the Brexit chaos, the UK opposition Labour Party has hinted towards bringing up an idea for the ‘Second Referendum’ in the Parliament.

Last week, the proposal presented by Prime Minister May on the Brexit issue, suffered a historic defeat. Following the rejection, the Prime Minister tabled the ‘Plan B’ that includes a provision to secure concessions for Ireland from the European Union and retaining the worker’s rights. However, as the “Plan B” is not perceived to be much different from the original Brexit deal proposed by May, it is facing growing opposition in the Parliament.

Interestingly, one group in the Parliament has initiated aggressive efforts for ‘No Deal Brexit’ and is said to have backing from the ministers and members of the ruling party too. UK Secretary of State for Work and Pensions, Amber Rudd, warned that nearly 40 ministers from the ruling party could resign over the ‘No Deal Brexit’. Dominic Grieve, a senior member of the ruling party, has also tabled an amendment to May’s “Plan B” demanding complete suspension of the Brexit article and initiating a new process. However, Prime Minister May has objected to this proposal. 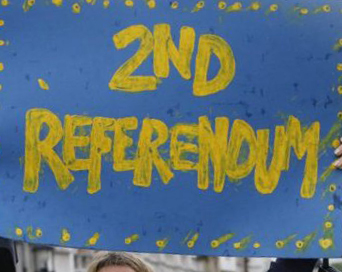 British opposition leader Jeremy Corbyn has opposed the ‘No Deal Brexit’ and has considered pushing forward an independent proposal, which includes an idea for a fresh referendum. Prime Minister May is said to be in a tight spot over Brexit as a few from the ruling party alongside the opposition Labour Party members favour the Second Referendum. The Labour Party members have called for an independent campaign for the Second Referendum called “People’s Vote” which is claimed to be gaining ground in the United Kingdom.

However, the leaders who advocated the First Referendum have gone against the proposal for a fresh one. According to Prime Minister May, a Second Referendum is not justified when the result of the first has not been honoured. Others from the opposition believe the Second Referendum move to be an insult to the British population. Nevertheless, it is only with the backing from the ruling party, the bill for the Second Referendum will be passed in the Parliament.

If the bill calling for the Second Referendum materialises, it will serve as an invitation to anarchy in the United Kingdom and its effects will be felt in the European Union also, claim analysts.

Washington: The Chief of Staff of the US Army General James McConville indicated that the United States…