Jerusalem / Washington – Exactly 70 years ago, the United States under President Harry Truman became the first nation to recognize the state of Israel. Today, we officially open the US Embassy in Jerusalem, the Israeli capital’, US President Trump congratulated Israel with these words. ‘Israel, in fact, had declared Jerusalem as its capital in 1948, at the time of its establishment. But it took 70 years to accept such a plain reality’, pointed out President Trump.

With the exceptions of Romania, Czech Republic, Paraguay, Honduras, Guatemala, Bolivia all the countries in the world have criticised this decision of United States about Jerusalem. Moreover, a few Islamic countries and Palestinian leaders are threatening of dire consequences for the decision. Therefore, the whole world had its attention focused on the inauguration of the United States Embassy in Jerusalem. The function started at 4 pm in the evening, Israel Standard Time. President Trump vindicated his decision through a video message on this occasion.

‘Israel is a sovereign nation and just like the other sovereign nations has the right to determine its own capital’, said Trump. Pointing out to Jerusalem being the home of the Israeli legislature, the Supreme Court, the Prime Minister and the President, Trump called the city as the ‘true capital of Israel’. Further President Trump said that he had only put his seal on this fact and recognized it. He also expressed an opinion that this should have happened 70 years ago. At the same time President Trump pointed out that Jerusalem is historically as well as religiously important to the Jewish people.

‘Although the United States has declared this decision, it continues to support the status quo at Jerusalem’s holy sites including ‘Temple Mount’ also known as Haram al-Sharif’, clarified President Trump. Trump also clarified that United States remains fully committed to facilitating a lasting peace agreement and is extending the hand of friendship to Israel, Palestine and to all their neighbours. ‘May there be peace, may God bless this Embassy’, said President Trump. 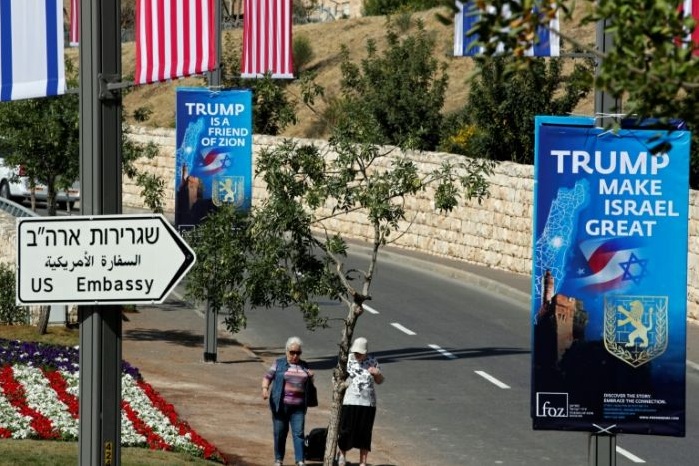 There is criticism from around the world of President Trump having hurted the feelings of not only the Palestinians but all the people following Islam . The decision is drawing strong reactions as the Palestinians in the Gaza Strip and the West Bank express their anger through violent protests. Although, President Trump is downplaying this as a plain reality, analysts claim the decision of having a very high symbolic importance.

In the meantime, Israeli Prime Minister Benjamin Netanyahu has thanked the US President for this decision. ‘President Trump has made a historical announcement today and there is no better friend of Israel like the United States and President Trump,’ said Netanyahu. ‘Jerusalem belongs to Israel and we are here to stay’, asserted Netanyahu.

Following the United States – Romania, Czech Republic, Paraguay, Honduras and Bolivia will also be shifting their embassies to Jerusalem. The process is expected to start in a few hours.

Monday saw flaring of Palestinian demonstrations at the Israel border. 43 protestors were killed in the action by Israeli Defense Forces, informed agencies in the Gaza Strip. The Israeli army has claimed of killing three Hamas terrorists planting bombs near the Israeli border.

71 people have been killed and more than 10,000 injured in the protests which have continued for the past eight weeks. Hamas has warned that the protests won’t stop until Jerusalem is freed from the clutches of Israel.

In the meantime, there were anti-Israel demonstrations in more than 6 cities in the West Bank, to the east of Israel. The Palestinian protestors have announced that they will take these protests right up to the Kalidaya post near Jerusalem.