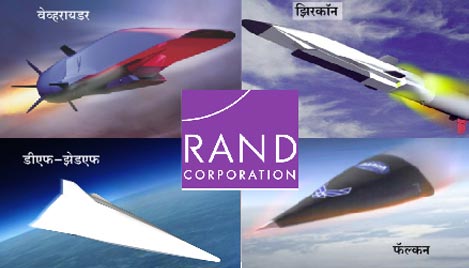 Washington : If hypersonic missiles, capable of travelling 25 times faster than passenger plane, are obtained by rival nations or terrorist organizations could possibly trigger the third world war, warns a US based study group. The study group has recommended that to avoid the third world war, US, Russia and China, which produces such hypersonic missiles should agree to not sell these missiles to any other nations.

Two trials each of “Falcon” missile developed by DARPA and “X-51 Waveraider” by US based Boing Company are completed. Russia, after the initial trials of missiles KH-90 and KH-80 hypersonic missiles, has developed a new hypersonic cruise missile “Zircon” and is making strong efforts to induct the missile in its military armoury. China is building a hypersonic missile “DF- ZF” to overcome the anti-ballistic interception systems to effectively target US aircraft carrier warships. London : King of Jordan, Abdullah Bin Hussein concluded a tour of US in the month of January. During… US to move its embassy to Jerusalem in two months

Washington/Jerusalem/Ankara: After declaring Jerusalem as the Israeli capital two months ago, the United…