London: British Prime Minister Boris Johnson announced that 20,000 additional police officials would be deployed to control the increasing crime in the UK and also that the process would be completed in the next three years. In the last few years, the number of violent crimes, including knife crimes, has dangerously risen in the UK. The incidents were attributed to a reduction in the police force and insufficient financial provisions.

After taking over as the Prime Minister last week, Johnson announced an assertive policy for the Interior Ministry and Ministry of Defence. The ‘National Policing Board’ was formed in the country for the very first time while laying focus on the police force for the maintenance of internal law and order. On Wednesday, the board convened its first meeting. UK Home Secretary Priti Patel, director-general of the National Crime Agency Lynne Owens and other senior police officials, were present at the meeting.

Johnson announced the recruitment and deployment of 20,000 policemen, saying that ‘It is necessary to bring down the crime rate in the UK, and we have even attained a certain amount of success in doing so. However, there remain many areas which are progressing in the wrong direction. We can collectively find a way to contain the problems, and a strong police force is required to be a priority for it.’ Furthermore, Prime Minister Johnson claimed that the process would be completed in the next three years, and the government would make the necessary funds available for the purpose.

On the sidelines of the British Prime Minister’s announcement, the UK parliamentarians have demanded additional deployment around schools and nearby areas. 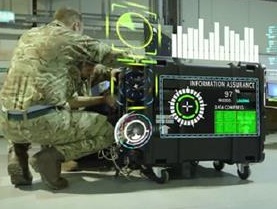 London: Taking cognisance of the increasing cyberattacks and the use of Information and Hybrid Warfare by enemy nations, the UK Army has announced the formation of an independent force for the task. The force has been named the ‘Sixth Division’ and would comprise of nearly 14,500 personnel. What’s more, the formation was primarily attributed to the hybrid warfare Russia had initiated.

The new Sixth Division was set up with soldiers and experts from the 77 Brigade Disinformation Unit and other departments from the army. Furthermore, Lieutenant General Evan Jones has been entrusted the responsibility of the new division. Jones clarified the stance behind the formation of the Sixth Division, saying that ‘The character of warfare continues to change as the boundaries between conventional and unconventional warfare become increasingly blurred. The army must remain adaptable and evolve as a fighting force’.

As per sources, the new force would be responsible for a wide range of responsibilities such as ‘Electromagnetic Warfare’, ‘Unconventional Warfare’ and ‘Information Operations’ along with cybersecurity. Moreover, joint campaigns in collaboration with the UK intelligence agency GCHQ, are likely to be undertaken, which may even include cyberattacks.