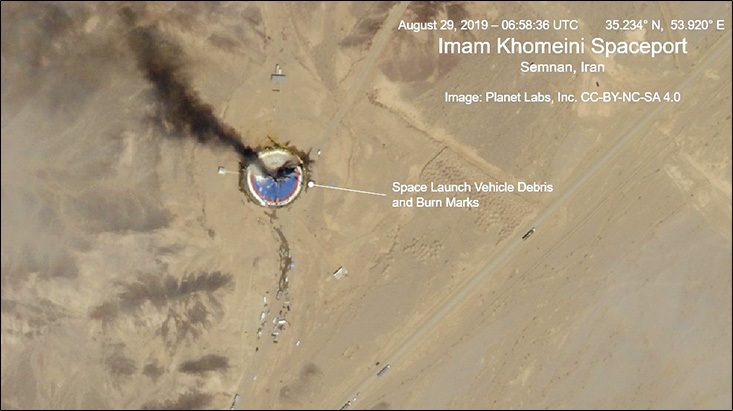 Dubai: Iran has been running its Space Program snubbing the United States criticism over it, but on Thursday, it suffered a significant blow. The rocket fired from the launch pad at the Khomeini Space Centre exploded before lift-off. Iran had remained tightly lipped on the incident. However, the satellite images released by US satellite imaging companies, show black plumes of smoke billowing from Iran’s launch pad. The blast is the third failure this year to deliver a blow to the Iranian space program.

Two US companies, Planet Labs Inc. and Maxar Technologies, released satellite images of the Khomeini Space Centre. The satellite images clearly show the smoke rising from the launch paad and broken remains of the rocket. However, Iran has rebuffed the claims, and its media has not acknowledged the incident. Also, a senior official has asserted that the rocket used for the satellite launch, was kept safe.

David Schmerler, a senior research associate at the Middlebury Institute of International Studies, stated that the satellite imagery from both US companies showed apparent destruction at the launch pad and plumes of smoke emanating from it. Schmerler believes the blast occurred at the time of the lift-off. “Besides, the images also show the vehicles gathered at the site to put off the fire. Even though Iran has repeatedly tried to deny the incident, an explosion certainly did occur at the Khomeini Space Centre”, Schmerler said.

Earlier, in January and February, two of Iran’s satellite launches had failed. The fire that was ignited at the Khomeini Space Centre in February had claimed the lives of three researchers. Furthermore, the Iranian media insist that a conspiracy was at play behind the mishap. They say foreign governments were launching secret attacks on Iran’s Space Program although the Iranian government has refused to comment on the incident.

Meanwhile, the United States has accused Iran of violating international restrictions by running the Space Program. Moreover, with the use of the rocket, required for the launch of the satellite, Iran made a show of strength, alleges the US.