Baku/Yerevan: A fierce conflict has sparked between Armenia and Azerbaijan, two Central Asian nations since Sunday and may escalate into war. Both countries have declared martial law in the state and blamed one another for initiating the conflict. Further, both sides are said to have suffered casualties in the Sunday conflict. Turkey has announced a military aid and other support for Azerbaijan while accusing Armenia of destabilising the area. Also, reports claim that Turkey has sent fighter jets and units of Syrian militiamen to Azerbaijan.

In a conflict that ignited two months ago, between Armenia and Azerbaijan, 16 soldiers had lost their lives. Also, Azerbaijan had threatened to launch missile attacks on Armenian energy projects. The tensions between the two nations have been constant ever since, and they have even engaged in smaller fights. Nevertheless, on Sunday, a fierce battle is said to have broken out between them.

Azerbaijan and Armenia have been locked in border clashes after they separated from the USSR. The autonomous region of Nagorno-Karabakh is the subject of their dispute although the area is currently a part of Azerbaijan. The population primarily comprises of Armenian-origin citizens, and Armenia has seized control of a part of the region. Several instances of cross-border firing between the two Central Asian nations have been reported in the last three decades. The border tensions between the two neighbouring countries, however, are sharply escalating. 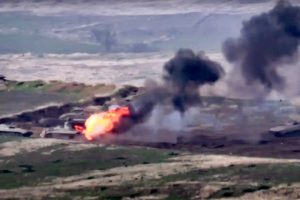 In the last three months, the two nations have stepped up troop deployment at the borders while also issuing threats to one another. On Sunday, the tensions transformed into a conflict and Armenia as well as Azerbaijan amassed missiles, tanks, artillery guns and drones at the borders. Armenia has accused Azerbaijan of initiating the strife and also claimed of downing its helicopters and drones. On the contrary, Azerbaijan has rejected all claims on having suffered damages. At the same time, the nation has warned that it was time for permanently ending the three-decade-old conflict and hinted at the battle sharply escalating. 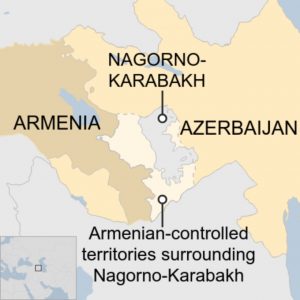 Turkey has now stepped into the Armenia-Azerbaijan conflict. The country has accused Armenia of sparking the standoff and declared its support for Azerbaijan. Claims have surfaced of Turkey sending its fighter jets and Syrian militia units to Azerbaijan for participating in the fight. Moreover, Russia had previously vowed its support to Armenia. Therefore, the Armenia-Azerbaijan battle has given rise to a possible faceoff between Russia and Turkey.