Trump claims meeting to have been positive

Singapore – Saying that the meeting with the North Korean Dictator Kim Jong-Un was phenomenal, the US President added that it was also a successful one. North Korea will be denuclearized soon, claimed President Trump. At the same time, Trump has acceded to the North Korean demand by cancelling the joint war exercises that the United States was to hold with South Korea. US President’s foreign policy appears to be highly successful, as he could convince a country like North Korea to give up its nuclear weapons program.

Attention of the whole world was focused on this historical meeting in Singapore that was plagued with uncertainty. Earlier, President Trump himself had informed the North Korean Dictator, through his letter about the cancellation of the meeting. But the subsequent compromising stance taken by North Korea convinced Trump to attend the meeting. There was a 45 minute discussion between President Trump and Dictator Kim Jong-Un during the meeting on Tuesday.  After the meeting, the two leaders signed a Memorandum of Understanding, the details of which have not been disclosed.

Thereafter, while addressing a press conference, President Trump expressed satisfaction over the meeting. He termed it as a historical meet and clarified that there was a positive response. Trump claimed that there was substantial progress in the bilateral relations between the two countries because of the discussions on the much-debated North Korean Nuclear Program and many other controversial issues. President Trump retorted that in the last seven decades nobody had given any thought to making this effort. “They ask, ‘How can I be here?’ But in the interest of millions of Korean citizens I would always be willing to have such discussions,” said President Trump. 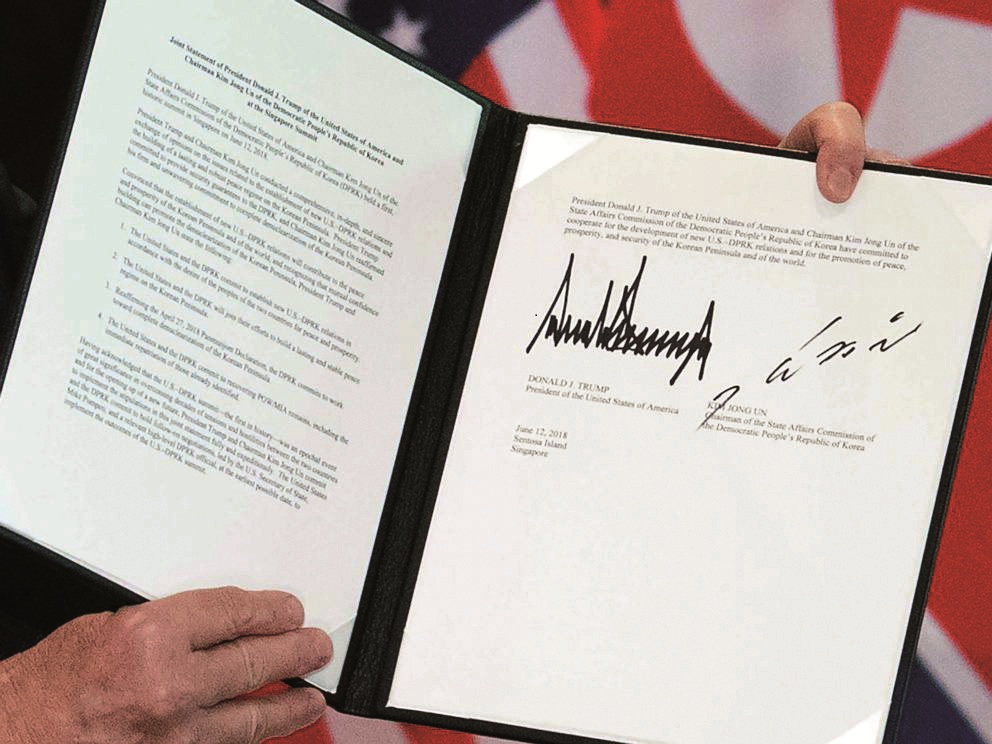 President Trump further said, ‘This was only a discussion, efforts at the political level will be initiated hereafter. Further negotiations will be handled by Secretary of State Mike Pompeo and his team’. At the same time, he also indicated that the decision to withdraw the sanctions imposed on North Korea will not be taken in a hurry and they will still continue. Last month, North Korea blew up their nuclear test site. This was an assurance that the country will not conduct any more nuclear tests. Referring to this, the US President praised North Korea for having taken this action.

The willingness shown by North Korea to stop their nuclear weapons program proves to be a resounding success for the US President’s foreign policy. In the past, the US media, analysts and some political leaders had severely criticised Trump for trading nuclear threats with the North Korean Dictator. But this aggressive policy adopted by Trump seems to have paid off. This has apparently further strengthened Trump’s grip on the administration. Most importantly, President Trump has delivered a severe blow to China by making North Korea, a country under the Chinese influence, agree with the United States.