Washington: The US Senate has blocked the motion for President Trump’s impeachment. A vote was conducted in the US Senate, the upper house of the US Congress, on two impeachment charges. The Senate acquitted President Trump on both the impeachment charges, which is considered a significant blow to his opponents. Donald Trump has welcomed the verdict while analysts believe the result could prove a crucial factor during the upcoming Presidential elections at the end of the year.

The opposition had claimed that President Trump tried to pressurise Ukrainian President Volodymyr Zelensky last year on a matter related to Democratic Party leader and presidential candidate Joe Biden. Accusing Trump’s behaviour as not acceptable as it was coming from the US President, a demand was made for legal action against President Trump. Accordingly, President Trump was accused of abuse of power and obstruction of the US Congress.

The Democrats have a majority in the lower house of the US Congress which is, the House of Representatives. The House of Representatives approved two articles of impeachment passed with a vote of 230 in favour to 197 against it. After the vote in December, the articles were submitted to the Senate. As per rules for the US Senate, house majority of two-thirds is required to pass the proposal in the US Senate. Nevertheless, the motion was expected to be voted out, given the clear majority of Trump’s Republican Party in the Senate. 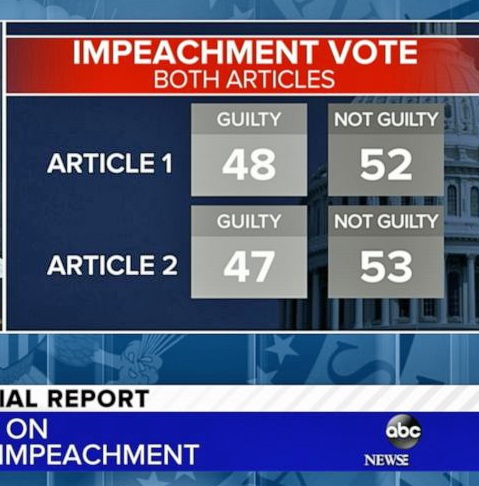 The impeachment vote on Wednesday only corroborated the claims as the Senators voted 52-48 and 53-47 on the two charges acquitting Trump. Republican Senator Mitt Romney was found to have voted against Trump in the first vote. Also, Romney justified his vote saying that Trump had misused the faith the US citizens had put in him.

This is the third instance of impeachment in the US history as also acquittal in the US Congress. Previously, impeachment charges were made against US Presidents Andrew Johnson and Bill Clinton. The Senate had acquitted both the US presidents of the charges.