Tokyo – When the world is busy fighting the Coronavirus pandemic, China is trying to take full advantage of the situation with acts aimed to establish its dominance. By sending naval destroyers to both, the ‘South China Sea’ and the ‘East China Sea’, Beijing is trying to cement its claims over these maritime regions. However, the alertness shown by the US and Japanese forces has foiled these attempts of China. The United States has dispatched two warships to the ‘South China Sea’ while the third will soon join them. At the same time, Japan has deployed its destroyers to the ‘East China Sea’ and forced back the Chinese destroyers.

Over the last few weeks, Chinese destroyers have intruded into the maritime borders of Vietnam, the Philippines and Malaysia, thus challenging their sovereignty. However, China’s bullying in the East China Sea and the South China Sea has been countered not only by the countries in the region but also by the United States. One of the most advanced destroyers in the US Navy, the ‘USS Montgomery’ along with ‘USNS Cesar Chavez’ have been deployed to the South China Sea. The US Navy has stated that the deployment is for the security of the Southeast Asian countries and international maritime routes. It is claimed that apart from these two vessels, the United States has sent another naval ship for the ‘South China Sea’.

At the same time, Japan has alleged that Chinese destroyers infiltrated its waters in the East China Sea and patrolled the area. Japan scrambled its destroyers, patrol vessels and pushed back the intruding Chinese destroyers. Also, Japan has lodged an official protest with the Chinese Embassy. However, China has dismissed the allegations and instead has asked Japan to focus on the war against the Coronavirus. Nevertheless, American analysts have alleged that China is at these heroics to hide its failure in handling the Coronavirus crisis.

Meanwhile, in the wake of China’s naval movements in the East and the South China Sea, the United States is said to have sent amphibious assault ships for Taiwan. At the same time, the movements of the US Navy in the Indian Ocean as also seen an increase. 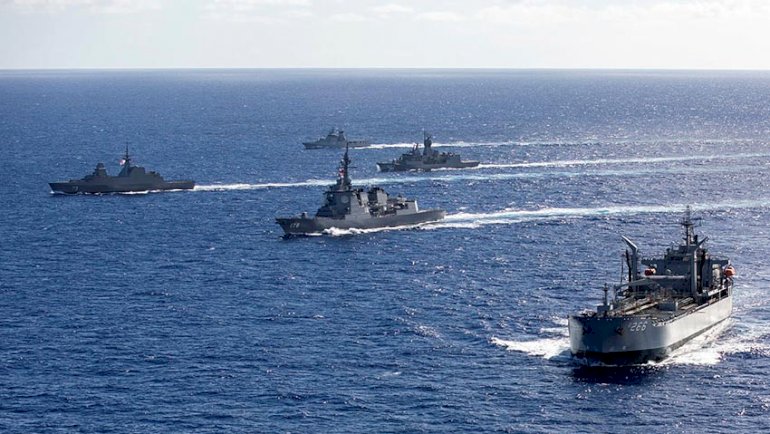