Baku/Yerevan/Moscow: Satellite images have shown that Turkey’s advanced F-16 Viper fighter jets are deployed at an airbase in Azerbaijan. The new information has confirmed the claims of Turkey being significantly involved in the Armenia-Azerbaijan war. A few days ago, Armenia had blamed Turkey’s F-16 fighter jet for shooting down its aircraft. At the time, Turkey had denied the claims although satellite images have now exposed its lies. Meanwhile, talks have commenced between Armenia and Azerbaijan in the Russian capital Moscow on Friday, where Foreign Ministers of the two countries as also Russia are participating.

Fierce fighting continues between Armenia and Azerbaijan into the 13th day, and both nations are believed to have suffered heavy casualties. Even though Armenia has revealed its death toll, Azerbaijan has not released information on its military casualties but only about civilian. According to local media and sources, thousands have died on both sides in the ongoing war. On Friday, Azerbaijan asserted that it had taken control of several villages in Nagorno-Karabakh. On the other hand, Armenia accused the Azeri Army of targeting Christian places of prayer. Armenia has also released photographs of an attack on an ancient place of worship in the city of Shusha. 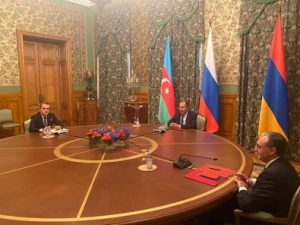 Given the recent events, Turkish involvement was evident in the Armenia-Azerbaijan war. The satellite imagery firm Planet Labs and US daily The New York Times have brought the information to light. Planet Labs had released satellite photographs of Azerbaijan last week. After studying the images, the New York Times concluded that two Turkish F-16s were deployed at an Azerbaijan airbase. Turkey had sent its fighters for the military exercise it had conducted with Azerbaijan in August. 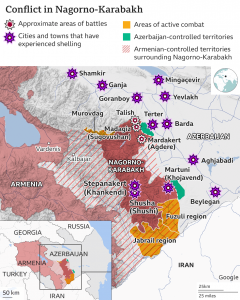 However, the presence of the advanced Turkish fighter jets in Azerbaijan, two months after the drills, has drawn much attention. The Turkish CN-235 is also said to be deployed in Azerbaijan along with the F-16s. After the war broke out between Armenia and Azerbaijan in the past month, Turkey had openly supported the later and started providing it with significant military assistance. Photographs showing the presence of Turkish drones in the war were released as well. Nevertheless, analysts say the presence of Turkish fighter jets so close to the battleground may turn extremely disastrous. Previously, Turkey was found to have sent Syrian militants to Azerbaijan for which it had received severe censure from the international community.

In the meantime, talks have commenced between Armenia and Azerbaijan in Russia’s Moscow from Friday. The Russian-led discussions are believed the first successful attempt at finding a resolution to the Armenia-Azerbaijan war. The Russian Foreign Minister Sergey Lavrov as also his counterparts from both the warring sides are participating in the Moscow talks. Even before the discussions could begin, Azerbaijan President warned Armenia that the negotiations were the last opportunity for the country. From the other side, the Armenian Prime Minister asserted that if other nations offered recognition to Nagorno-Karabakh, it might help resolve the issue.