Paris/Nice: Three were killed in a terrorist attack near a church in France’s Nice. An extremist carried out the attack, and the attacker has been arrested. French President Emmanuel Macron has visited the attack site and announced the deployment of 7,000 soldiers for protecting the state. Additionally, he has also raised the threat level of national security to that of emergency. The Nice attack has become the third terrorist attack perpetrated in France in this month.

At approximately 9 am on Thursday, one extremist committed a knife attack near a church in Nice. Two people from the house of prayer while one from the vicinity were killed in the assault. One of the victims is a woman who was beheaded by the attacker. Security forces took swift action after the knife attack and arrested the assaulter. Besides, Christian Estrosi, the Mayor of Nice, has called the incident a terrorist attack and said an investigation was already underway by the French anti-terrorist cell. 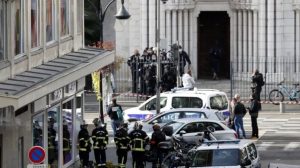 The French President Emmanuel Macron paid a visit to Nice after the terrorist knife attack. At the time, the President announced mobilising additional troops for national security. President Macron has said that all places of importance, including religious sites and schools, will see the military deployment of soldiers in the next few days. Also, Prime Minister Jean Castex informed the security threat level had been upscaled to that of an emergency. Currently, 3,000 soldiers are deployed in France.

The Nice terror attack in France was condemned from across the globe. As they denounced the attack, the Indian and the UK Prime Minsters expressed solidarity with France. Furthermore, NATO has also assured it is standing firmly behind France. In the past five years, France has been repeatedly targeted with terrorist attacks. Since 2015, France has been a victim to 10 major terrorist attacks.