Washington: US Secretary of State Mike Pompeo has warned, ‘The United States prefers peace to war in Syria. But if the Turkish invasion on the Syrian Kurds continues, President Trump may decide to take military action, and the United States is fully prepared to undertake such action.’ The 5-day ceasefire Turkey had agreed upon with the Kurds, is ending in the next few hours. However, the Turkish President has announced that the attacks on the Kurds would not stop. The US Secretary of State Mike Pompeo’s warning comes in response to the statement.

The decision to withdraw the troops from Syria has come under severe criticism from within the United States. The opposition blamed the United States of shirking off responsibility towards the Kurds, who had helped their country in its fight against the ISIS. In an interview with a news channel, Secretary of State Pompeo justified President Trump’s decision and countered the allegations by the opposition.

Secretary of State Pompeo clarified that if Turkey crossed the ‘red line’, the United States would initiate military action, although he did not define the red line. Pompeo stated that President Trump could take the decision, thus indicating the aggression against the Kurds would not be tolerated.

At the same time, Secretary of State Pompeo has reminded Turkey of the economic sanctions the US President had imposed against the state last week. ‘The United States has launched economic sanctions against Turkey and will even add political pressure,’ Pompeo said.

Earlier, Erdogan had announced a 5-day ceasefire after talks with US Vice President Pence and Secretary of State Pompeo. Turkey, however, continued to attack the Kurds even during the ceasefire. Despite receiving criticism from around the world, the Turkish President announced continuing the attacks on the Kurds. 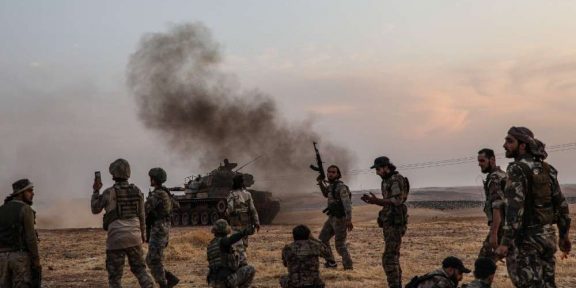