Washington: In a report, US daily ‘The New York Times’ has raised the question – ‘If the United States could not prevent the Turkish leader from routing its Kurdish allies, how can it stop him from building a nuclear weapon or following Iran in gathering the technology to do so?’ The daily claimed that Turkey’s ambitions were not limited to Syria and cautioned the United States asserting that the country was on its way to making a nuclear bomb. Moreover, the report alleged that Turkey was in contact with the father of Pakistan’s nuclear bomb and nuclear world’s most famous black marketeer, A. Q. Khan.

Pakistani nuclear scientist A. Q. Khan had supplied nuclear technology to Iran, North Korea and Libya, completely disregarding the Nuclear Non-Proliferation Treaty (NPT). Fifteen years ago, the matter was proven, and Pakistani nuclear scientist had even confessed to the crime. In due course of time, A. Q. Khan had stated that he was working in line with Pakistan’s policies and just because the issue became public, he confessed to the crime to save his country. No action was taken against A. Q. Khan and Pakistan, despite the admittance to a serious offence of nuclear proliferation, all because the United States required Pakistan’s assistance for its counter-terrorism campaign in Afghanistan.

The then administration of President Bush had thus ignored the Pakistani crimes. However, even after the lapse of 15 years, Pakistan was exposed to assisting Turkey in developing nuclear weapons. Some speculate if Turkey was the fourth nuclear client of Pakistan, after catering to Iran, Libya and North Korea. Even the New York Times raised the very question given the increased contact between Turkey and A. Q. Khan. The daily highlighted that Turkey had assisted Pakistan in obtaining nuclear technology and materials necessary for developing its nuclear arsenal.

The article has once again brought Pakistan’s serious violation of NPT in focus. Only a few days ago, Turkish President Erdogan had made his nuclear ambitions public. Some countries have missiles with nuclear warheads, but the West insists we can’t have them and that I cannot accept, Erdogan had said. The Turkish President has undoubtedly made the statements only after making all the preparations to fulfil his nuclear ambitions. It has further deepened suspicions over Turkey’s support of Pakistan on the Kashmir issue all the same even though it meant hurting India.

Even the leading countries in the world were not willing to contradict India by taking Pakistan’s side on the Kashmir issue. The Islamic countries have also stood by India on the matter. In this scenario, the Turkish President making statements in Pakistan’s favour has now unveiled the real intent of nuclear politics being behind the move. Turkey is a NATO member, and the military alliance mandates the involvement of the NATO in a conflict for protection if a member nation was under attack. Despite the intense security assurance, Turkey’s attempts to acquire nuclear weapons assumes much significance.

The matter has challenged NATO and may spell trouble for Turkey soon. At the same time, if the charges of supplying critical nuclear materials to Turkey are proven against Pakistan, the country would have to face severe consequences. Also, the United States and the international community cannot afford to ignore Pakistan’s violation of the NPT this time around. Therefore, the New York Times report is indicative of sparking severe repercussions. 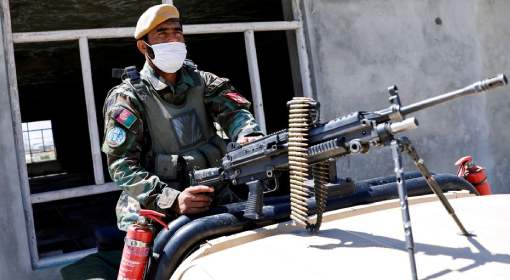 Kabul: In the last 24 hours, the Afghan Armed Forces killed 210 Taliban militants and indicated that…