Moscow/Paris/Istanbul: New information has suggested that foreign fighters from Syria and Libya, as well as mercenaries, have been sent to participate in the Armenia-Azerbaijan war. Therefore, the Russian Foreign Ministry has demanded they be removed immediately from the warzone. Russia and France are even said to have discussed the matter and have released a joint statement regarding it. In the statement, both countries have called on the Minsk Group, which was founded for finding a resolution to Armenian-Azerbaijan conflict, to take the lead. However, Armenia and Azerbaijan have snubbed the ongoing efforts of the international community. The current war may thereby intensify significantly and soon.

The war continues into the 5th consecutive day, and the attacks are intensifying further. New information has suggested that Azerbaijan is now receiving support from Turkey as well as Pakistan. Also, media outlets have claimed Turkey had sent terrorists from Libya and Syria to Azerbaijan. A severe reaction has thus emerged from the international community over Turkish activities. 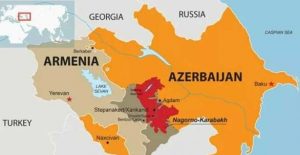 The Russian Foreign Ministry has issued a warning, which states that ‘According to reports, Libyan and Syrian terrorists have been sent to Nagorno-Karabakh. The incidents are highly concerning. The activities may further aggravate the tensions in the war-torn region. Besides, it poses a prolonged security threat to all countries in the region. The nations perpetrating these activities must put an end to them immediately and must withdraw the terrorists and mercenaries from the region’. A few hours after the statement was released, Russia and France held discussions over the Armenia-Azerbaijan war. Both nations confirmed telephonic talks between Russian President Vladimir Putin and his French counterpart Emmanuel Macron. 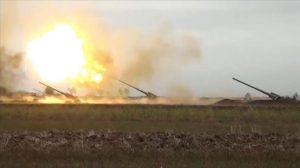 France has released details of its discussions with Russian President Putin, which stated, ‘France and Russia concur on giving a push to efforts for reaching a ceasefire agreement between Armenia and Azerbaijan. We call on both warring nations to stop the violence and take steps to deescalate tensions. France has expressed severe concerns over reports of Turkey sending Syrian terrorists to Azerbaijan. The Syrian Observatory for Human Rights has alleged that Turkish security firms had sent 900 Syrian terrorists to Azerbaijan.

Meanwhile, both nations have said the attacks had further intensified on Thursday. The Azerbaijani Defence Ministry informed they had launched pounding attacks on Armenian locations with tanks and artillery guns, and seized control of certain areas. Moreover, a video released by the country showed Armenian tanks being blown up. On the contrary, Armenian officials affirmed their armed forces had countered all of the attacks.