Major General Qassem Soleimani was the identity of Quds Force, an elite and crucial unit of Iran’s Islamic Revolutionary Guards Corps (IRGC). Protecting Iran’s interests in foreign states and growing Iran’s dominance, are believed to be the goals of Quds Force. Major General Qassem Soleimani, the head of the Quds Force, has executed it with extreme finesse. He was the reason behind the significant rise in Iran’s influence in Iraq, Syria, Lebanon, Yemen. Soleimani was, thus, considered Iran’s masterful General.

Soleimani was considered the second or third-most-powerful person in Iran. Gen. Soleimani used to boast with pride about him holding the authority that finalizes Iran’s foreign policies. Soleimani was Iran’s Supreme Leader Ayatollah Ali Khamenei’s most trusted person. Analysts believe Soleimani even had a chance of being assigned Iran’s political leadership.

Soleimani tried to bring the US and Israel to its knees by forming a powerful coalition of pro-Iran militia in Iraq, Syria, Lebanon and Yemen. He even took strong action against Iran’s adversaries, Saudi Arabia, UAE, Bahrain. Soleimani was believed to be the most popular among the people of Iran.

In 2006, Soleimani delivered a significant blow to Israel by supporting Hezbollah in its 36-day war with Israel. Likewise, the military commander had taken bold action against terrorist organization ISIS, which executed anti-Iran operations.

Washington/Baghdad: The United States carried out drone strikes and killed Iran’s most powerful military commander Major General Qassem Soleimani. The US MQ-9 Reaper Drone fired four missiles at Major General Soleimani’s car convoy which was leaving from the Baghdad International Airport. The US launched the strike on Friday at 12:34 am which killed Iran’s top military leader on the spot. The attack also claimed the life of Abu Mahdi al-Muhandis, the deputy commander of the Popular Mobilization Forces (PMF). ‘Soleimani had hatched the plot of launching fierce attacks on US citizens. The strikes were made to foil the plan and protect the US citizens,’ stated the Pentagon, the Headquarters of the US Department of Defense.

The Pentagon confirmed launching airstrikes that killed Gen. Soleimani on orders of US President Donald Trump. ‘Soleimani had hatched a dangerous plot for killing US citizens and delivering a blow to US interests. We neutralised the military commander before he could take his plans to fruition,’ asserted the Pentagon. The US President has confirmed the strike. ‘Soleimani has caused the death of thousands of US soldiers and conspired to do so even in the near future. However, before he could execute his plan, we found and executed him,’ Trump said.

The US President alleged that ‘Brutal crackdown is ongoing against the anti-government protests in Iraq. Qassem Soleimani was responsible for the action either directly or indirectly.’ Also, Secretary of State Mike Pompeo claimed the general was unpopular in his own country. Pompeo went on to state that the Iraqi people came down to the streets and celebrated the death of Soleimani. The Secretary of State has even released a video where Iraqis were seen celebrating the event. Nevertheless, mixed reactions were visible within the US political circles on the incident.

US Senator Lindsay Graham welcomed as also supported the action against Soleimani. Soleimani had American blood on his hands, Graham reminded. However, the opposition has questioned the move asking, ‘The US killed Qassem Soleimani but has the US President thought about the consequences of the action?’ ‘Killing Soleimani is not equivalent to killing the head of a terrorist organisation. He was Iran’s top military commander and killing him amounts to inciting war with Iran. Is the President of the United States aware of that?’ reprimanded the leaders of the Democratic Party. Furthermore, the Democrats alleged that the US had not fought a direct war with a powerful country like Iran before.

The US interests in the Middle East are under threat due to the self-destructive decision of the US. Also, Trump has made a subtle statement on Social Media which said, ‘Iran never wins wars, and neither do they negotiate. Even the Iraqis are happy with the action on Soleimani as they do not want Iran’s control over their state. However, in the last 15 years, Iran had consolidated its control over Iraq,’ asserted Trump.

Iran threatens the US, says it will avenge Soleimani’s death

Tehran: Iran has threatened the United States by stating, ‘The United States has declared war with Iran by killing Qassem Soleimani. Now, the US will solely be responsible for the consequences. Ira’s Supreme Leader Ayatollah Khamenei has threatened to avenge the death of Major General Qassem Soleimani brutally. As per the political system in Iran, the Supreme Leader holds the ultimate authority. The analysts the world over have, therefore, expressed concerns that Iran would soon realize the threat Ayatollah Khamenei had issued while some believe the event will turn into a flashpoint for the Third World War. 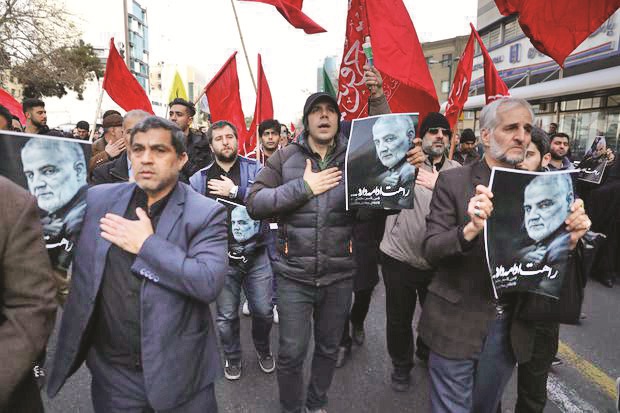 ‘The world’s most cruel people have taken the life of General Soleimani. Soleimani was fighting brutal powers for many years now. He died as per the will of God although his fight is not over,’ said the Supreme Leader as he offered prayers at Soleimani’s last rites. Khamenei is determined to take extreme revenge of Soleimani’s death. He threatened the US with retaliation by saying that ‘all the people fighting for justice will now step forward to avenge his death’. On the other hand, Iran’s President Hassan Rouhani claimed Iran’s resolve had strengthened after Soleimani’s assassination.

Hundreds of thousands of people came down on the streets across Iran to pay their last respects to Gen. Soleimani and demanded revenge for his death. An emergency security meeting of Iran’s defence committees was held after the incident.

Irani news agencies claim that strategies against the US were discussed during the meeting. Iran’s Foreign Minister Javad Zarif accused the US of ‘declaring a war’ against Iran by killing Major General Qassem Soleimani.

Zarif threatened the US, saying that the US would be solely responsible for the series of events that would now follow. Even the Middle Eastern analysts have expressed concern over the incident and asserted that the US had initiated the war. Its deadly consequences would surface within a matter of days. Lebanon’s Hezbollah and the Iran-backed Popular Mobilization Forces (PMF) in Iraq have issued orders to their supporters to remain ready for war. ‘We will achieve the ultimate victory,’ is the message they sent to the supporters.

Russia criticised the US action and expressed concern saying that it would lead to severe consequences. China has appealed to the US to demonstrate restraint. In contrast, UK Prime Minister Boris Johnson has warned the US ‘A war with Iran was not affordable in the present situation.’ Analysts are trying to predict Iran’s move in response to the US action. Iran had previously threatened to target the US bases in the Middle East. At the same time, analysts have underscored that Iran and Iran-backed forces had threatened Israel, a close US ally, they were capable of launching hundreds of thousands of rockets from various locations at the state.

At any moment, Iran can shut the Hormuz Strait and stop all oil transport through the route. In that scenario, the economies the world over will come under tremendous pressure. The oil price surged by 4% only a day after Soleimani’s death and is indicative that it may soon lead to significant instability. Moreover, some analysts believe Iran-backed groups may cause terrorist attacks in the United States, along with the Middle East.