Naypyitaw: Myanmar’s military has killed more than 200 protesters in the past month and a half since it seized power, a pro-democracy group has said. On Sunday, Myanmar’s military killed over 50 people in a single day. Even after that, the crackdown continues, and nearly 20 people were killed in the last 48 hours. At the same time, Aung San Suu Kyi, the leading pro-democracy leader in Myanmar, is being targeted. The military has accused her of corruption and warned of legal action against her. 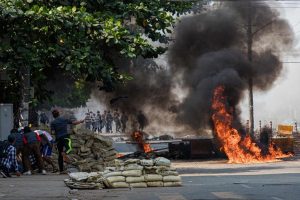 In major cities such as Yangon and Mandalay, including Myanmar‘s capital Naypyidaw, the democratic protests are intensifying. The protesters, who had marched peacefully and shouted slogans against the military rule in the early days, are now opposing the crackdown. Obstructions have been set up at various places to stop the troop units, and slingshots are being used for counter-attacks. Leaders of the democratic government, overthrown by the military, have backed the protesters’ response.

Support for pro-democracy protesters from all levels is growing. An influential religious group in Myanmar has issued a statement strongly condemning military action. At the same time, it also offers condolences to the protesters who were killed in the military crackdown. Pro-democracy leaders in Myanmar have written an open letter to foreign companies calling for a halt in investments and business in Myanmar. These include companies in Myanmar’s energy sector. 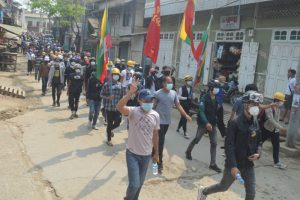 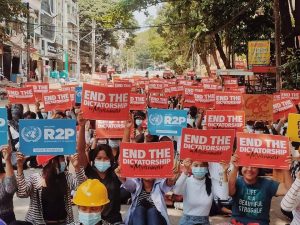 The pressure is also mounting on the Association of Southeast Asian Nations (ASEAN). A group of former leaders from some of ASEAN’s member states has criticised the bloc calling on it to take a more aggressive and assertive stance towards Myanmar. The group, which includes leaders from countries such as Indonesia, Cambodia and Thailand, has demanded targeted sanctions against Myanmar’s military regime.

ASEAN has taken a soft stance in the wake of the military coup in Myanmar, as the bloc’s constitution provides non-interference in a member state’s internal affairs. However, in the wake of the brutal crackdown in Myanmar over the past month and a half, pressure appears to be building on the group. Even the United Nations (UN) has hinted at taking action on the Myanmar issue. Sources have said that evidence is being gathered against the ongoing military crackdown, and all related information is being noted.

Meanwhile, Myanmar’s military, which has been firing on pro-democracy protesters, has targeted the country’s prominent leader, Aung San Suu Kyi. The military has claimed that Suu Kyi has committed significant corruption in the past few years and released an entrepreneur’s confession to support it. Based on the confession, preparations are underway to file a new case against Suu Kyi.